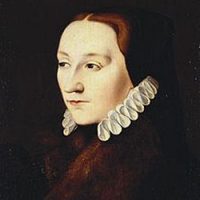 Frances Brandon was born 16th July 1517 and died 20th November 1559. She was the daughter of Mary Tudor, younger sister of King Henry VIII and Charles Brandon, Duke of Suffolk. Her mother had been married to the French king Louis XII and when he died she had married Brandon without the King’s permission. Henry VIII had eventually forgiven them but had fined them a huge amount of money. As a result the family were not at court as often as most noble families.

In 1533 Frances married Henry Grey. After suffering two miscarriages, the couple had three daughters, Jane, Katherine and Mary. In 1553 when it became clear that King Edward VI was dying, John Dudley, Duke of Northumberland and King Edward became concerned for the succession. England was now Protestant but next in line to the throne was Mary, a Catholic that vowed to restore England to the Catholic faith.

Frances’ daughter Jane Grey had married John Dudley’s son, Guildford. King Edward signed the Devise for Succession which nominated Jane Grey as his successor. Jane herself was reluctant to become queen but had little choice. She was proclaimed Queen of England on 10th July 1553, four days after Edward’s death. She and Guildford were housed in the Tower of London to await their coronation. However, Jane did not have the support of the people who rose for Mary. On 19th July 1553 Mary was proclaimed Queen. Jane and her husband Guildford were both found guilty of treason, but knowing they were innocent pawns, Mary did not sign their death warrants.

In February 1554, Frances’ husband, Henry Grey, joined Thomas Wyatt’s rebellion against Mary’s planned marriage to King Philip II of Spain. Their plan was to overthrow Mary and put Jane back on the throne. The plan failed and Grey was executed. Mary now had no choice but to order Jane Grey’s execution. She was beheaded on February 12th 1554.

In 1555 Frances married her Master of the Horse, Adrian Stokes. She had two stillbirths and a daughter, Elizabeth who lived for just a year.