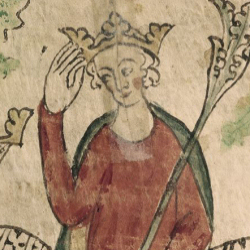 King Edward II was born 25th April 1284 to King Edward I and Eleanor of Castile at Caernarfon Castle, Wales. He was the fourteenth of the couple’s fifteen children. When he was four months old he became heir to the throne when his elder brother, Alfonso, died.

Edward was educated by Dominican friars and was taught riding and military skills by Guy Ferre.

In 1289, as part of a treaty with Scotland, Edward was betrothed to Margaret, Maid of Norway, the 6 year old heir to the Scottish throne. The aim of the treaty was to bring peace to Scotland and to give Edward I a hand in the politics of Scotland. However, the young Margaret died on the journey from Norway to Scotland.

A year later, in 1291, Edward was betrothed to the half sister of Philip IV of France, Blanche. The betrothal was broken by Edward’s father who was going to marry her himself but then changed his mind.

in 1294, Edward was betrothed for the third time to Philippa, daughter of Guy of Flanders. Philip IV of France was so annoyed that he forced Guy to repudiate the marriage then kept Philippa imprisoned for life.

In 1299, it was agreed that Edward would marry Philip IV’s 4 year old daughter, Isabella. The marriage went ahead in 1308 when Isabella was 13 years old. The couple were not especially close, largely due to Edward’s close relationship with Piers Gaveston but they did have four children:

By 1326 the marriage had broken down and Isabella had begun an affair with Edward’s enemy, Roger Mortimer.

Piers Gaveston joined Edwards household in 1300. The two soon became very close friends and may have had a homosexual relationship. Edward’s favourite was knighted in 1306, a move which elevated his status. However, he was exiled by Edward I the following year.

With opposition mounting, Edward had no choice but to remove Gaveston. Oiers was created Lieutenant of Ireland and sent to manage the country.

When Gaveston returned in 1309, tensions with the barons increased again. The following year parliament refused to grant Edward taxation in protest against the power of Gaveston. In 1312, with Edward still refusing to reduce the influence of Gaveston, the Barons planned to capture Edward, Isabella and Gaveston. The three split up and Gaveston surrendered to the Earl of Pembroke. However, he was seized by the Earl of Warwick who executed him after a show trial.

Edward was distraught at the death of his favourite, but with Gaveston gone, the nobles pledged allegiance to Edward.

In 1316, England was plunged into civil war when the Barons led by Roger Mortimer opposed Edward’s rule. Edward did have the support of the Despenser family and father and son, both named Hugh, soon gained the favour of the King. Edward showered the Despensers with gifts and money.

In 1318 a truce was made and it was agreed that all decisions made by the King should be approved by a council of nobles. However, Edward continued to favour the Despensers and in 1321 the civil war resumed. The nobles demanded that the Despensers be exiled and Edward was forced to comply to restore peace.

In 1323 Charles IV demanded that Edward pay homage to him in respect of Gascony. In 1325 Edward’s wife, Isabella and his son, Edward, went to France to pay homage to Charles. Isabella decided not to return to England or her husband and began a relationship with Roger Mortimer who had been exiled to France. Those nobles who were dissatisfied with Edward’s rule soon joined them in France.

In 1326 Roger Mortimer, Queen Isabella and Prince Edward landed at Orwell on the east coast of England with a small invasion force. They quickly gained support and within months had captured and executed Hugh Despenser elder and younger.

In January 1327 the nobles decided that Edward II should be forced to abdicate in favour of his son. On 21st January 1327, Edward was named Edward of Caernarvon while his son became King Edward III. As the new king was still a minor Roger Mortimer and Isabella of France would act as joint regents.